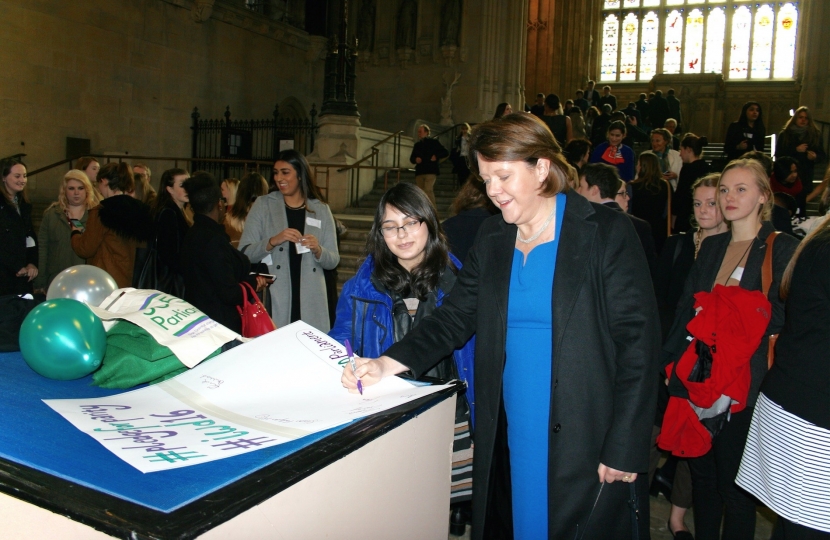 Maria Miller hosted students at Westminster as part of International Women’s Day to promote greater equality for women in politics and the wider world.

Maria met with Aheng Negargar from Queen Mary’s College, Basingstoke, who was able to watch during a session of the Women and Equalities Select Committee, visit Downing Street, shadow Maria and watch the International Women’s Day debate in Parliament.

The group of 66 students from across the UK also took part in a workshop run by Frances Scott, founder of the 50:50 Parliament campaign, and her team which got everyone thinking about how more female representation in Parliament can be achieved.

MPs from the Conservatives, Labour, Liberal Democrats and the Scottish National Party all took part in the day.

During the debate, MPs discussed the motion “That this House expresses its solidarity with International Women’s Day; notes with concern that, despite women making up 51 per cent of society as a whole, more progress needs to be made in electing women to Parliament, as well as in establishing equal pay and parity between men and women in positions of leadership; and calls for greater action against FGM and other practices that are harmful to women”

Maria said: “International Women’s Day comes around every year, but since last time we have something else to celebrate, which is the establishment of the first ever Select Committee for women and equalities. Everybody in this House who was involved, and those no longer in the House, should be congratulated on the work they did to establish the Committee, which I have the privilege of chairing.

“Today, we have turned the tables in the Committee: young women have taken evidence from Members of Parliament. I particularly welcome my constituent, Aheng Negargar. She has been able to be with me today, and I know she has enjoyed it immeasurably.

“Congratulations to everybody who has taken part.”

Eastleigh MP Mims Davies, who led the debate in Parliament and organised the day for the MPs and students said: “This has been an important day for women across the world and it has shown here in Westminster to all the students who came and to MPs too just what can be achieved and must be achieved if we are to have equality, not just in the numbers of women MPs, but also across the whole of society.”