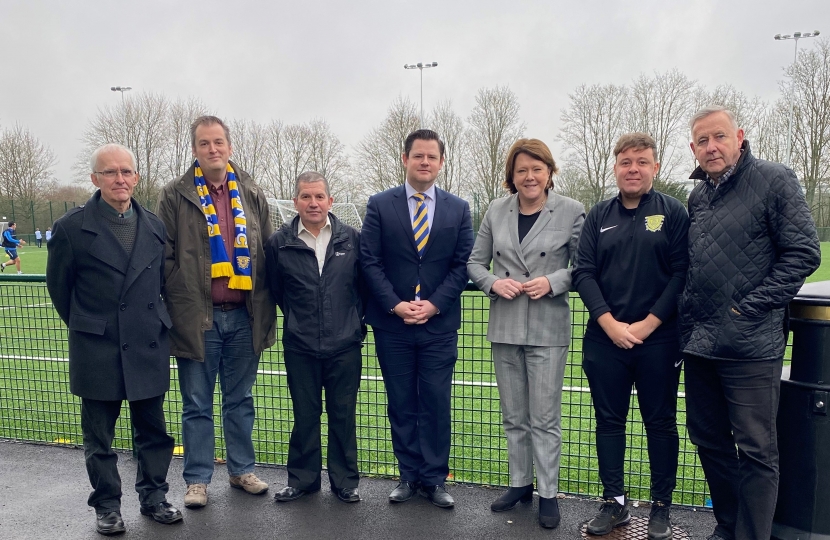 Maria Miller MP asked for a meeting with Basingstoke Town Football club for an update on progress to secure a new home for the team in Basingstoke. The Camrose ground landowner asked the Club to vacate the site so that it can be developed for house building.

Meeting at the Winklebury FA Complex, Maria heard of the Clubs plans to make Winklebury their home and saw the works that needs to be undertaken.

Maria has written to Sport England who have confirmed that they have lodged an objection to development at the Camrose Ground until mitigation for its loss as a sports facility is agreed. Such mitigation could be used to undertake the works required to the Winklebury Grounds.

Maria also met with Aaron Nicholson who runs the Academy.

Maria commented; “The Club faces significant challenges as they look to the future. The staff, volunteers and fans all want the Club to return to Basingstoke to play as soon as possible and I agree that Winklebury would be a great home.

“It is difficult to understand why the Club was asked to leave the Camrose Ground by the land owner before that site has received planning consent and before the mitigation required by Sport England could be agreed and put into action.

“ Basingstoke Town is part of the history of our Borough and I hope they are back playing in Basingstoke as soon as possible.”