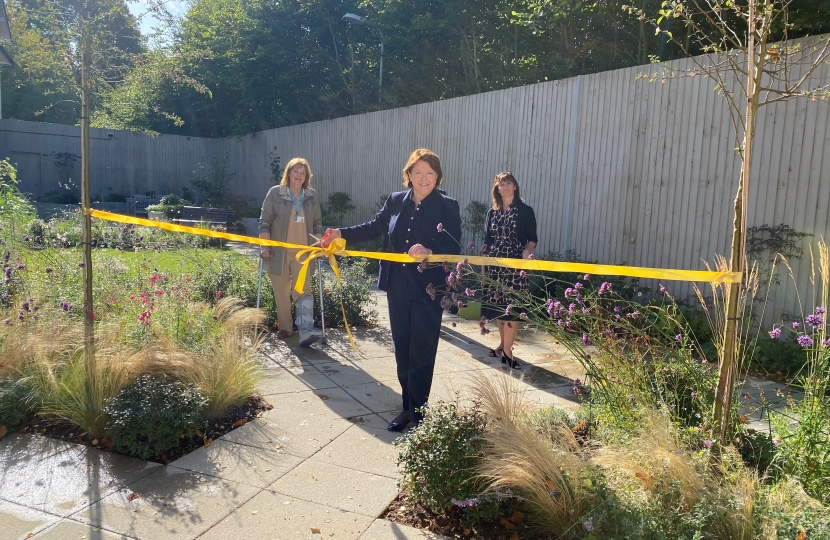 Following many months of volunteering, fundraising, partnership working and hard physical work,  the garden was unveiled to the patients and ward staff who are set to benefit from the new outdoor space.

Maria cut the ribbon and formally opened the garden which will specifically help military patients.

The project was funded by donations from military charities, local businesses and individuals.  The project transformed wasteland into a garden. Whilst Parklands is home to a general inpatient mental health ward, the garden has been primarily designed for the patients of its specialist MoD ward, which treats around 85 serving Ministry of Defence personnel each year. These armed forces individuals are treated for conditions such as post-traumatic stress disorder, adjustment disorder, bi-polar and schizophrenia.

“There is growing evidence of the therapeutic impact that getting outside and enjoying a garden can have on someone’s mental health, particularly those at their lowest ebb and in need of positive inspiration from nature. This was the reason behind our staff and volunteers fundraising for the special project – and we owe a huge debt of thanks to The Armed Forces Covenant Fund, ABF The Soldiers’ Charity and the RAF Benevolent Fund, as well contributions from local individuals and companies like Primark and Travis Perkins, for their support and generosity.”

In order to design and create the garden, Southern Health joined forces with the horticulture team from Sparsholt College (Chelsea Flower Show gold medal winners) and worked alongside veteran volunteers who've received support in the past from Help for Heroes. The garden has been designed as a therapeutic space with both stimulating and reflective areas, including the familiar scents of herbs and the gentle movement of ornamental grasses to provide year-round interest.

“It’s wonderful to be at this garden today to see the ‘before and after’. I was here a few months ago when it was just a piece of wasteland and now we see such a fantastic transformation . The garden will be a huge benefit not only to patients but also to the staff, now able to come outside and use this beautiful space. For us in North Hampshire, our military connections are enormously important and we know how crucial it is to look after the people who have served our country – and this garden is a welcome addition to doing just this.”

Local MP Maria Miller has welcomed that Hampshire County Council will provide a similar level of support for families during the half term break that would have otherwise been provided through the Government’s previous voucher scheme through schools.