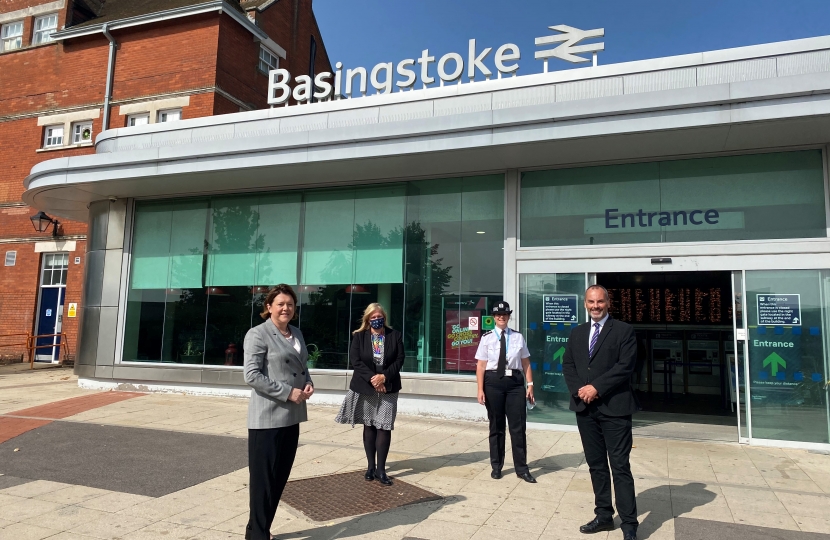 The main aims of the Taskforce are to tackle drugs on the railway network, and to protect children and vulnerable adults who are often exploited by gangs into selling or moving drugs.

“Police intelligence shows that gangs are using children and vulnerable adults to transport drugs using the local railway network with Basingstoke Station used as a gateway for transporting drugs into Hampshire. I witnessed this first hand during the British Transport Police (BTP) operation at Basingstoke station when 2 young people were caught within an hour of the Police operation starting. The action being taken by BTP, working with the local Hampshire Constabulary, is sending a clear signal  that gangs can no longer rely on our railway network to transport drugs.

Drug taking is a criminal offence and far from a “victimless crime”. Anyone in Hampshire who buys or uses drugs like cannabis and cocaine is supporting criminal organisations that exploit children as young as 13 to carry the drugs into our county.

Anyone using the train network should  look at The Children’s Society #LookCloser campaign to know the key signs to spot a child being used to traffic drugs into our town and for details of how to contact the British Transport Police.”

“Our Taskforce is in a unique position, we operate nationally and target County Lines activity across the railway network. Since December, we’ve been carrying out operations daily, always based on developing intelligence that shows where gangs are operating. We get part of our information through working in partnership with other law enforcement agencies, but also importantly through the support of the rail industry who train their staff to spot signs of exploitation.  These indicators are small but invaluable and help inform where we target next. We have a rapidly evolving understanding of County Lines offending and we are prepared to tackle it, wherever the intelligence leads us.”

Local MP Maria Miller has welcomed that Hampshire County Council will provide a similar level of support for families during the half term break that would have otherwise been provided through the Government’s previous voucher scheme through schools.